This chair has a very special place in my heart for a number of reasons. Mainly because my father made it. He built it using the plans in the book De stoel van Rietveld, or Rietveld’s chair by Marijke Kuper and Lex Reitsma, which is a fascinating book documenting the prototypes and different versions of the chair, including a baby chair, before Rietveld finally settled on the Red-Blue Chair designed in 1918.

In 2006 a Dutch newspaper asked its readers to nominate objects representing ‘Best Dutch Design’. This was one of them. Gijs van Tuyl, director of the Amsterdam Stedelijk Museum at the time and an owner of a Red-Blue chair, described the chair as ‘a chair as a statement, an archetypal prototype, pointing towards the future’, and went on to say that although he owned one, he never sat in it. Just admired it.

It is true, our one sat in pride of place on the upstairs landing of the house I grew up in. In those days, it was placed beneath a poster depicting the very same chair advertising a De Stijl exhibition. We rarely ever sat in it but passed by and admired it as you would a painting. Even though we didn’t sit in it very often, it is quite comfortable. The height, the angles of the back and the seat are just the right proportions to fit the body. Despite the family traffic around, it never had anything dumped or draped across it, which believe me was quite an achievement in our house.

It is also special, as at the time my father made it I was very interested in the de Stijl movement and in particular Piet Mondrian’s Composition in Red, Blue and Yellow. I even designed and hand knitted a Mondrian jumper as a tribute to the artist and his work. Although my father’s chair is still going strong, sadly, I can’t say the same for the jumper. The moths got at it, but I was very proud to wear it at the time.

You may recall an earlier blog post featuring Rietveld’s Z chair which was designed later than this chair in 1943. It was very much a chair to be grouped together around a dining table. This one, being the more famous of the two, and in primary colours very much the look of De Stijl, is really a one-off piece that is a real showstopper. 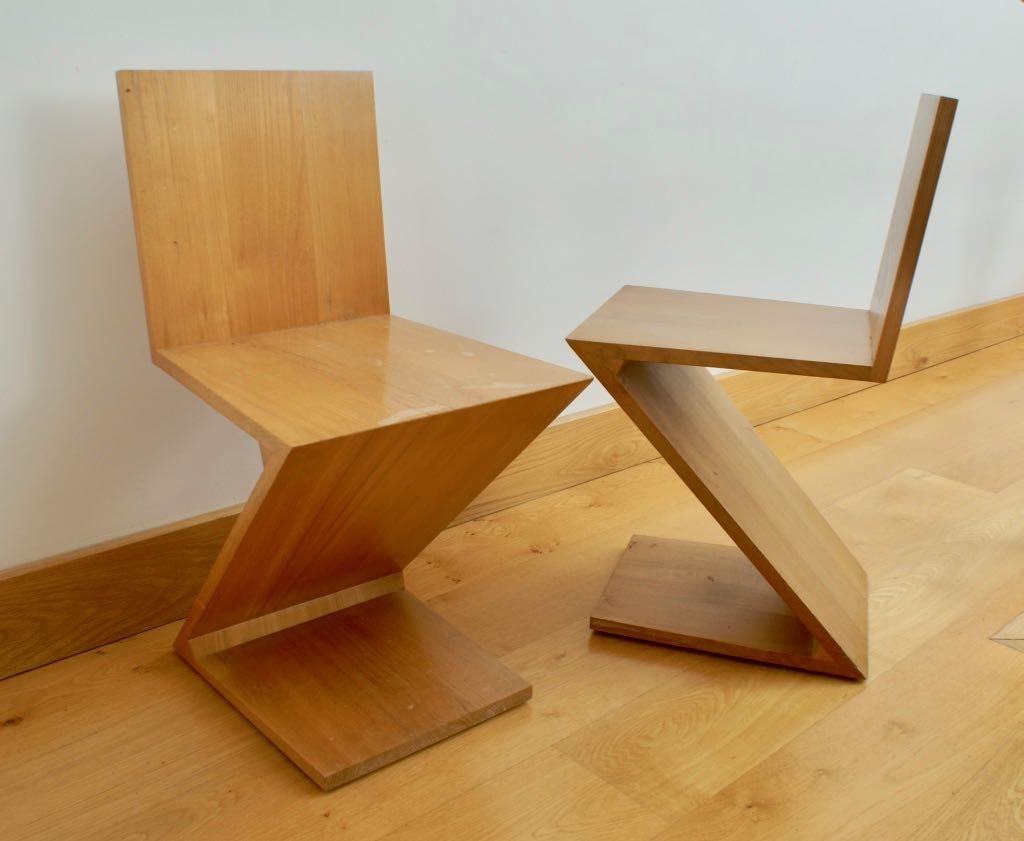 Take a look at this chair. How on earth does it stay standing, you may ask? Just four pieces of flat wood stuck together and it doesn’t collapse when you sit on it. Amazing. Well I suppose six pieces of wood if you count the triangular batons on the diagonal joint. But even so, what a feat of engineering.

Gerrit Rietveld born in Utrecht in 1888 was the son of a carpenter and worked with his father until he was 15. While working as a draughtsman for a jeweller he studied architecture with P J Klaarhamer and as and Architect became involved in de Stijl (the style) founded in 1917 by Theo Van Doesburg and Piet Mondrian. This group reduced forms to an arrangement of horizontal and vertical lines and used mainly primary colours. These principals are clearly seen in his work at that time.

After leaving de Stijl in 1928 he became concerned with social housing and inexpensive production methods experimenting with concrete and pre-fabrication.

In 1934 he designed the Zig-Zag chair from four slabs of hard wood with dovetail and glued joints and two wedges to fix the seat and the base. Rietveld originally wanted to create the chair from one piece of wood but as this became impossible to produce, it then became four pieces. From 1935 the chair was produced by Dutch furniture manufacturer Metz&Co. Today it is manufactured by Cassina. I have inserted a short film on how the chair is made here

There is no denying that this is a stunning chair, totally unique and now available in several wood finishes and also in red, yellow and blue – very de Stijl. It is surprisingly comfortable, looks good on its own or a group around a simple dining table and probably the best bit is that it only takes up a small amount of room.

You can buy your own from Skandium here.